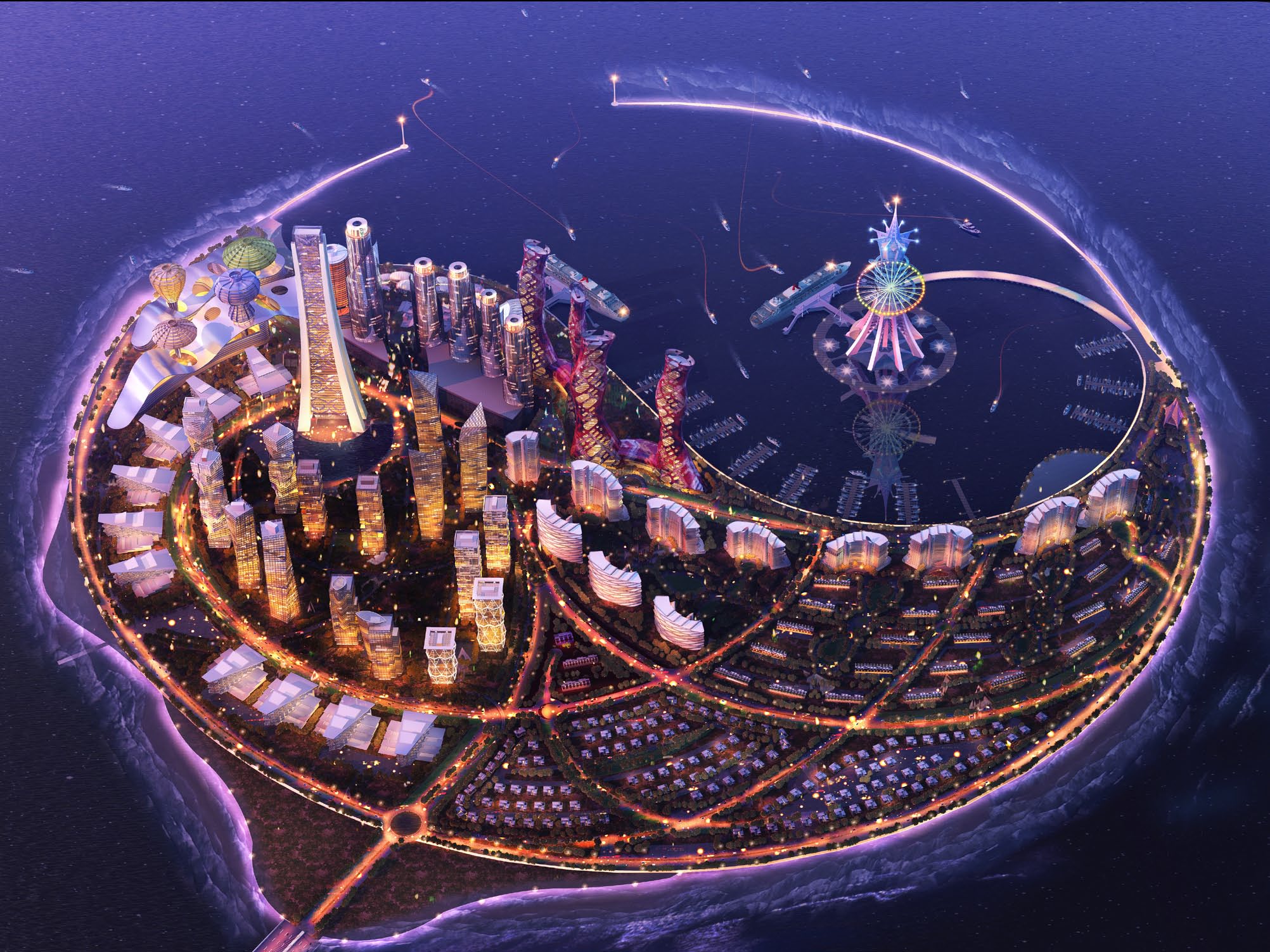 Hainan Airlines Group wanted to create an iconic statement for their world-class man-made island project that reflected the many dimensions of Hainan Island culture and turned to MCM Group to bring this vision to reality.

The design philosophy for this vibrant project blends important cultural symbols from Hainan as well as from the region’s Buddhist background. This distinctive and culturally inherent design creates a clear brand identity for the island, which serves as both as a gateway for China to explore the world, as well as an international destination itself.

Eight layers of symbolism and metaphor begin with the Tibetan Buddhist symbol “Taiji” (Yin Yang). The Taiji influences the overall shape of the island with the land portion as the “Yin,” and the enclosed bay as the complimentary “Yang.” The symbol is further emphasized by making each respective “dot” the dominant architectural focal points for each half of the island. The land-based Yin “dot” is occupied by the 500-meter Icon Building, whereas the water-based Yang “dot” is represented by the 300-meter Vertical Amusement Park.

The Buddhist philosophy is drawn into the second layer as well. “Qi Gong” or the five elements of water, fire, space, air and earth produced by the union of the yin and yang are characterized in the island’s neighborhoods. When the Qi Gong are diffused throughout, harmony is created.

Each element becomes a theme for a neighborhood. The “Water” element influences the entire first phase of the project to the north and is represented by the “white sphere” of the terminal dome building as well as the circular shapes of the other buildings in this area. “Fire” is home to the Condotels and hotels along the west side of the island and is emphasized with triangular and pyramidal building shapes. “Space,” to the west, is underscored by incorporating dissolving drop shapes into the architecture and landscaping around the neighborhood’s apartment towers and townhouses. “Air,” to the south, houses private residences and is accentuated with the use of semi-circles and crescent shapes.  The Earth element neighborhood at the center of the island includes the Icon Tower and all of the office towers which integrate squares and cubes as its main architectural inspiration. All symbols draw directly from regional Buddhism.

Feng Shui influences the third layer to create a harmonious arrangement of buildings, water and landscape elements. There are the four celestial animals, the dragon, the phoenix, the tiger and the tortoise. They represent the perfect site in landform school of Feng Shui, the original classical school. It is believed that every building is surrounded by the spirits of these four symbolic animals. Ideally these four directions should be harmonious (from the height, forms and shapes) with each other but unfortunately, in our modern times, such symmetry is difficult to achieve as control of the topography or surrounding structures is limited, at best. Therefore these four celestial animals were positioned to compensate for these hurdles and be placed around the site according to their cardinal directions: the dragon in the east, the phoenix in the south, the tiger in the west, and the tortoise in the north. These locations bring good health, power, wealth, and career luck. In Hainan the tallest buildings to the north represent a mountain backdrop. Building heights range from higher on the left to lower on the right. Water elements accentuate the entry sequence.

The fourth and fifth layers relate to the sea. Layer four is the seahorse shape of the Phase I land fill which has been accentuated with a distinctive “tail” element. Phase II continues the ocean theme with the use of the nautilus shell as the basic organizational generator. The nautilus in the fifth layer not only represents the sea, but also the Fibonacci Spiral, which is one of mathematics’ most important theorems – representing the Golden Mean in nature – a structure that repeats itself at all size scales. Hainan’s road systems and neighborhood divisions are based on this principle, and the island’s entire structure radiates from the central earth element zone of the project with mathematical precision.

Traditional Hainan Culture is on display in the next layer, six. From the Pearl Museum and Tropical Plant Pavilion at the visitors’ cruise dock, to the Dancing Li buildings representing the island’s ancestral people, the traditional lantern-shaped resort facilities, and the fishing docks and local restaurants, each create an experiential representation of the island.

The seventh design layer is dedicated to Hainan Airlines Group and the resort and tourism element. Here the tallest building, the Icon Tower, is the symbol of Hainan Air, along with the cruise lines and dock processing facilities, tourist residences and a themed entertainment tower.

The eighth and final layer reflects the contemporary Hainan lifestyle, including the office towers and the long-term residential elements of the project. Grounded in the spirit of place, Hainan’s man-made island design blends together layers of local meaning. The structural core is inspired by traditional Buddhist philosophies about balance, and inherent in the island’s form, representing the constant presence of the sea, are the sea horse and the beautiful spirals of the nautilus shell. Traditional Hainan values and experiences are expressed in culturally distinct streets, building styles and cuisine. From there, exhilarating tourism experiences in resorts, promenades, a cruise harbor and leisure facilities are incorporated. Finally Hainan’s contemporary lifestyle is articulated within the island’s residential community and work spaces. The design is inspired by the environment and culture the project inhabits and will foster. In both theory and practice the design speaks to Hainan’s people, their place and their ultimate aspirations.