MCM Group’s designers studied Singaporean attractions, including theme parks, hotels and commercial buildings to determine if any specialized design could be applied to MCM projects.

Known as one of the “Four Asian Tigers”, Singapore radiates as one of the most international countries in the world, with numerous world-class attractions. City Hall and the Bay Area, the country’s center, display a mix of modern and fashionable buildings, alongside older British Colonial Era structures. Singapore’s China Town, not only brings together an array of famous and diverse religious landmarks, but also reveals the harmony of the country’s multi-ethnic society. Connected to the Central Business District (CBD) by pedestrian boardwalks, road and monorail, the island offers soft sandy beaches, world-class aquatics, golf courses, fantastic adventures and colorful entertainment. A perfect relaxation getaway!

At Universal Studios Singapore, the only Universal Studios theme park in Southeast Asia, vacationers could escape into immersive Hollywood movie scenes, like Shrek and Minions and enjoy the 24 thrilling interactive cutting-edge shows, rides and attractions (18 of which are adapted for Singapore) within the seven themed zones. Notably, the degree of “thrill” elevates sequentially between programs. So, it’s important to read the park’s map to experience the park fully. We recommend that you check out each attraction, following the map counter clockwise. The experience begins with the “Hollywood” zone, inspired by Hollywood Boulevard in the 70’s, peppered with palm trees and Los Angeles architecture of that time.

Visitors then find themselves at the “New York” zone, a post-modern New York City feel, replicated from the theater, museum, living quarters to the storefronts.


The “Sci-Fi City” zone comes next, fashioned after what a metropolis would be like in the future. It’s an underground power station envisioned to generate electricity from nature, reflecting astounding advanced technology. In Sci-fi City, patrons could test their thrills threshold on the seated roller coaster and/or transform into a fighter as Bumblebee’s partner in the Transformers ride, a classic dark ride worth a try. 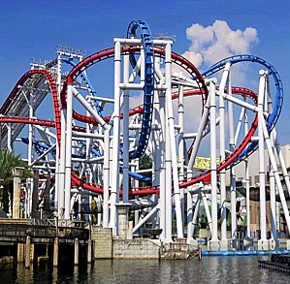 
“The Lost World” zone highlights two franchises in one, with separate areas themed according to Jurassic Park and Waterworld. Adventure rides reside here.


Universal Studios Singapore illuminates as a spectacular view at night, with a brilliant light design. Come feast your eyes for yourself.

Meet diverse marine life at the largest aquarium in the world as of 2018. S.E.A. (South East Asia Aquarium) gives more than 100,000 marine animals from over 800 species a home in 45,000,000 liters of fresh and salt water, taking visitors through a marine journey around the world’s oceans, with different zones designated by geography. With the world’s largest viewing panels, beautiful ocean scenery gives visitors a wonderful peek into the enchanted life under the deep blue, satisfying curiosities and eliciting admiration. One of the highlights at the S.E.A. Aquarium include the huge glass paneled arched hallway, where visitors could walk under sharks and fish, with an all around view of the ocean above. The jellyfish automatically captivate a memorable experience, sporting elegant fluid forms and brilliant colors. One of MCM Group’s designer hailed the jellyfish, “Simply the cutest, most fascinating and charming marine creature here”. 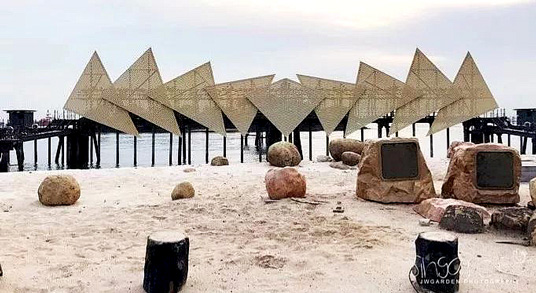 “Wings of Time” integrates art, technology and nature. We continue our trip, after enjoying Universal Studios and the S.E.A. Aquarium, to Siloso Beach, where MCM Group Beijing admired the installation’s lights and shade visual show. The “Wings of Time” theater holds special performances and is also the world’s first permanent night show set in the open sea. France’s ECA2, an award winning events & production company, designed “Wings of Time” with about $10 million Singapore dollars going towards production and special effects. ECA2 created the “Song of the Sea”, the other multi-sensory production that shown at the same location prior to the “Wings of Time”.


“Wings of Time” features an awe inspiring display of multimedia, fountains, 3D and fire visual effects, orchestrated with majestic music and live performances – a spectacular night show blended into the environment. In 25 amazing minutes, tourists get lost in a fascinating and venturing world as the stage transports into the future. The special effects immerse the viewer fluidly, captivating exotic vistas to mind. What an exciting experience!

With the “Wings of Time” to the west and Universal Studios Singapore to the east, the Merlion, affectionately know as the Patron Saint of Prosperity, protects Singapore’s opulence in the center of the island’s entertainment area. At a gigantic 37 meters, around 12 stories tall, the structure embodies the mythical creature bearing a lion’s head and a fish body, symbolizing the country’s past and disposition.


The lion’s head symbolizes Sang Nila Utama, a 13th century Srivijayan prince who was said to have united the Kingdom of Singapura, based on folklore mixing historical figures and events. The fish body is an ode to the country’s ancient fishing village, Temasek, and country’s role as a port city. Temasek means “sea town” in Javanese. The Sentosa Merlion, erected in 1996, attracts tourists around the world.


Are you excited to see these attractions? Tell us what kinds of programs you look forward to? Leave us a message at our MCM Group Beijing WeChat. You’ll have a chance to participate in the development strategy of beautiful village and rural complex.