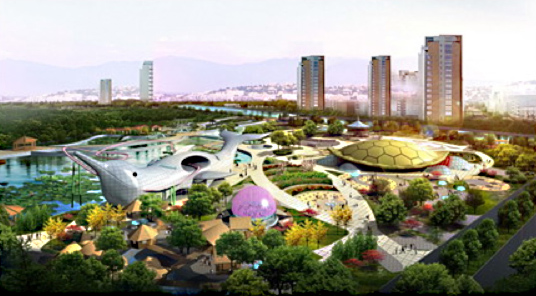 The park is comprised of two sections: the South Parcel, a water area with entertainment activities;  and the North Parcel, an entertaining area with a water roller coaster, a maze, a tree house, indoor activity venues, thematic playground, and like activities.  A main entrance and a secondary entrance are situated at the east side of the site.  An inner circulation path connects different play areas that are based on ages.

Located next to the river along Zhaoxi East Road and Wuxing Avenue, city leaders unveiled a site rendering prepared by MCM.  Officials pointed out the central plaza area, called “Golden Fish Plaza.” Where the park’s theme is expressed by aquatic animals from South China, such as turtles, white-flag dolphin, Chinese alligators, carp, and the like  The design was inspired by the Jiangnan Water Village lifestyle of Huzhou city.

A large pond is located at the central area of the park featuring fitness and entertainment facilities, such as yoga and Tai Ji space. There is a plaza near the central area as a perfect place for events or outdoor concerts. By the lake stands a Tea House surrounded by the Asian Garden. Ring paths go through the whole site with scattered observation deck, tranquil fishing area and leisure space.

City Park leaders remarked that “Qiujiayang Children Park is an important step for the city to provide a world-class family environment.  MCM has created a comprehensive park integrating sight-seeing, tourism and family leisure.”